The moment I read about Casey’s project of a blog tour about collections, I knew I wanted to be part of it. I’ve always been collecting things since I was a little girl. I believe there is something that we could call a « collector mind or spirit » that some people have and others haven’t. Those who don’t can never understand the reason behind collections. And those who do tend to amass things. I have several consiously chosen collections that I have built over the years, and some that just kind of built themselves through gifts and unplanned buyings. It took me a while to decide what I was going to talk about. Of course just after my teaser post last Sunday I started a new sewing project that gave me a totally different topic idea. I actually started to write two versions of this post on totally different subjects. The more I thought about it, the more I felt the new version was a better match for this blog tour. So I’m switching subjects and keeping my first idea in a corner of my head for a future post. The collection I’m going to share is a treasure I discovered unexpectedly, not a collection I built myself, which is why I didn’t think of it as a suitable subject at first. It is hidden is those old boxes and tins. Can you guess what it is (you can actually see a glimpse of the content through the plastic boxes)? I didn’t when I first found them. They contain a nice collection of buttons! To understand why it is special to me I have to explain how I came to have those boxes. When we arrived back in France in 2009 we were very lucky to find a temporary lodging among relatives. The people our house belonged to got too old to live by themselves so it was left empty, but wasn’t sold at first. We were allowed to live in there for some time in exchange for taking care of it. Those persons aren’t really blood relatives but I’ve known them since I was a child. I should say that the house hasn’t been emptied before we got there, so it was still full of its owners things. When we left we did a big clean up of all the rooms, going through everything. That’s when I discovered the tins, in a corner of the kitchen shelves. When I oppened them and found out what was inside I really felt like a child discovering a hidden treasure. I instantly called my mother to ask if I could keep them. 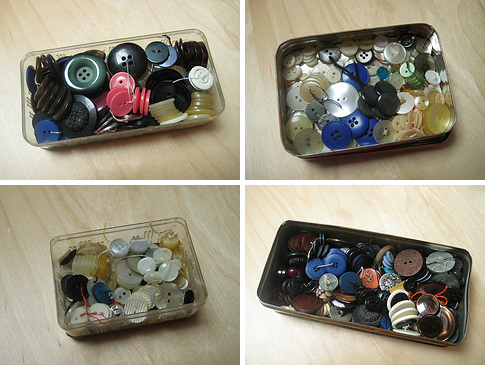 Because of this it is a « cherished » collection in many ways. First because I’m happy to have those buttons to turn to when I need some. And the fact that they have a history of their own makes them that little bit extra specials. But what makes them really special is whom they belonged to. That lady and I have absolutely no blood in common, but she saw me grow up and I love her as if she was my grand-mother for real. Not being real blood relatives make things a little less easy now she doesn’t live in her house anymore, especially since she’s now at the other side of France. So I feel happy to have her buttons, it’s like a special gift from her to me because I’m the only one who sews. And of course the last reason that make those buttons so perfect for this tour is that they have been someone else’s cherished collection before. It probably took her some time to amass all those buttons. Maybe she took some out of old clothes, she bought others, and slowly it became this collection I inherited. Isn’t it great? There are different sizes and colours, although she seemed to like neutrals (light colors and blacks), blues and browns. Some of them seem to be the exact same design with slightly different colors. I wonder if it could be the effect of time on them or if they were different from the beginning. I love how she tied similar buttons together with a bit of thread! I never thought of that. I might do it with my other buttons. I included here a few pictures of some of the decorated buttons. I’ll leave you with more eye candy and less talk. I took the opportunity to share another collection with you: my lace/crochet doilies and motifs collection. Those pieces come from various places (the first ones I got in Japan), some are vintage, others are new. I think the thing that started this addiction is this book which gave me new ideas on how to use lace. I love lace, I love how delicate and pretty it is. I’d love to use them as decorations in sewing projects (that’s the excuse I give myself when I buy them, I only get pieces I think I might use later). Edit: I’ve decided to include all the doilies pictures here instead of directing you to Flickr. ^^There are not so many so the post won’t be too long and it will be easier for you. Thank you for your visit and be sure to go to Casey’s blog to check all the other wonderful entries to the tour. ^_^